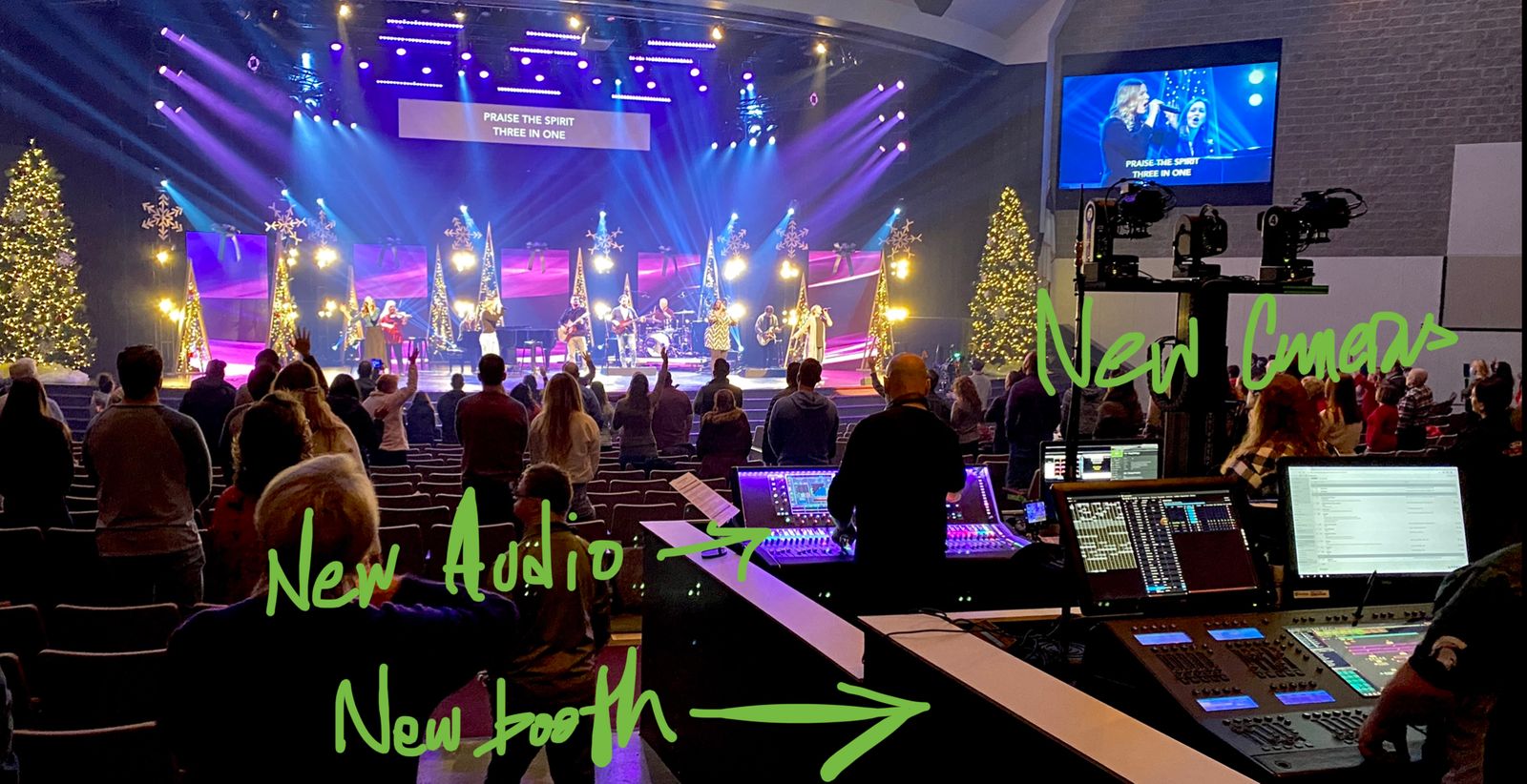 Those of you who know me well understand that I’m not really at all a gear head. However, I know that sometimes an upgrade is necessary. This went in earlier in the month. Quite a Christmas Gift!!
I’ll explain the project and the why behind it all in an upcoming post. The story will be a good addition the portfolio, I’m certain.
And we’re only getting started with the capacities. Tune in on Christmas Eve to see how incredible the experience translates with our clear, natural audio and the epic cinematic visual capture!

What We Pulled Off Last Week

I sent the tally below to our team. It certainly has been an honor and thrill getting to lead in this season.
By my count, last week’s Good Friday and Easter services required:
13 computers (with multiple crashes and reboots required as they were pushed past the max) for such tasks as creating music, collecting and filing assets, editing video, mixing audio, producing graphics, polishing transitions and signing off with QC before export.
15 sermons / preachers
6 hosts for communication, Scripture readings, Creeds, etc.
Also Communion.
As well as some special content for First Service and Families.
9 songs as well as an organ prelude!
>100 artists’ content of audio and video were part of our "choir"
https://woodsidebible.org/watch/easter-service-4-12-20/

Event Producing
The request was to find a way to show appreciation to >900 volunteers. I was offered the support of the other directors on the staff and a budget of $10,000. At first glance that sounds like a lot of money, but I had to use that for catering for dinner and desert, decorations, entertainment, awards...as well as invitations, childcare, photography, table hosting, setup, strike, dishwashing; also what presenters and MCs would be responsible for what communication...
I took survey of all the stakeholders - directors and key leaders. I learned what worked well with similar events in the past. I assembled a team of key partners whom I could brainstorm with and develop concepts. We did research to figure out what our ideas might cost. We met again and leaned into what had good value and scrapped what didn’t. We surveyed and used statistics to determine how many we thought would actually show up; and how many might. We put it on the calendar and after figuring out a brand for the night we sent out invitations. We worked through details with the caterer and the band. We made certain sacrifices from our ideal hopes, but ended up with remarkably clever innovations to our plan. We created a signup sheet for directors to own delegated chores and presented the vision to the staff with the request for ownership… In addition to my team of co-leaders, our whole staff stepped up and helped make a really special evening. The video above shows a few of the highlights.Download PDFDownload PDF

Volunteering as part of the Troy Production & Arts team

Lot’s of you ask about what volunteering as part of the Troy Production & Arts team is like. This video let’s some of our volunteers tell you in their own words!
https://www.facebook.com/KCTLiveVideo/videos/848572705350956/

serving artistic leadership and the thrill of live production

I snapped this passage from a magazine to share with my team. Beyond just being for a video director, these are good thoughts to contemplate regardless of our position - serving the artistic vision and the thrill of live production when supporting and enhancing art and communication

We love providing the opportunity for volunteers to use their skills and passions to support and enhance art and communication. *no experience necessary! We have four entry area options to join our team:
Please do connect with us and join our great team! 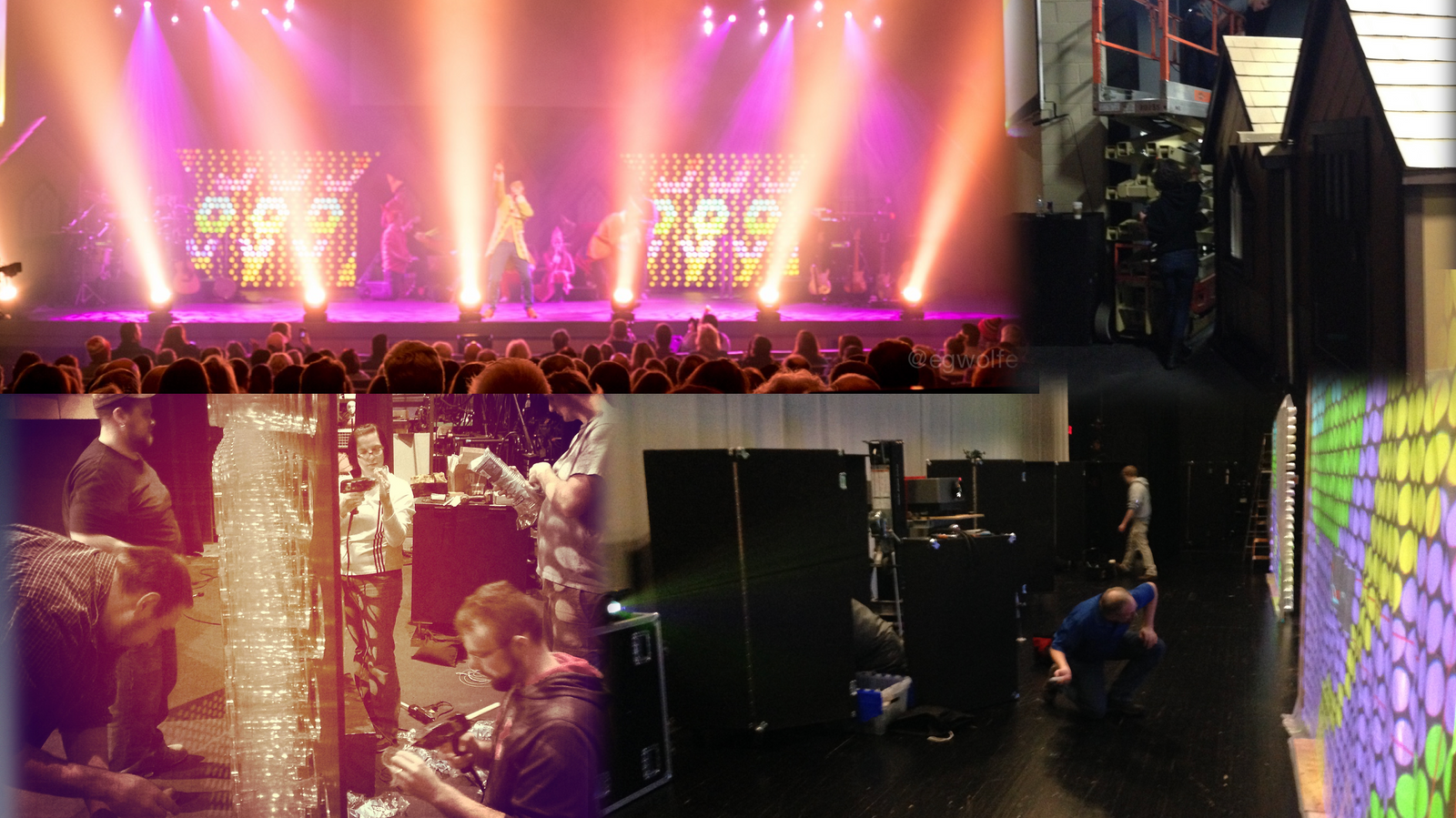 There was a lot of prototyping and iteration as well as complexity in leadership of multiple departments to achieve the success in this Production Design.
The process was really fun to nerd out with research into classic toys and some surveying of people who grew up in that era. Along the way, we kept coming back to the movie Elf.
We began with an idea of what classic toys might bring nostalgia. The LiteBrite was a fun idea. I liked it for multiple reasons:
We design the Elf inspired Houses:
A problem became an opportunity when we figured out how to hide the set behind the main traveler and tell a prelude story based in Nepal and using chalk art to tell about partners all over the globe. 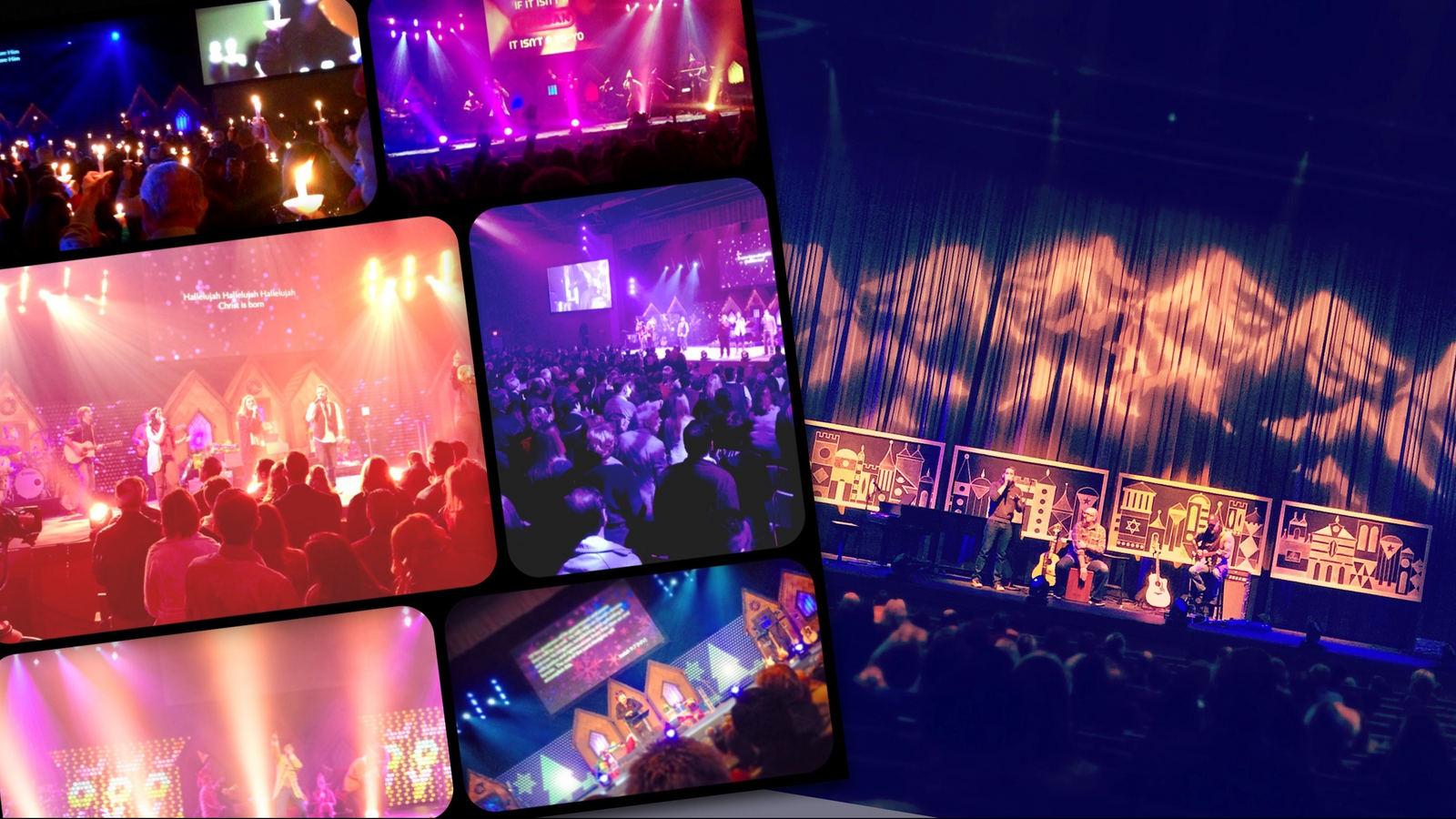 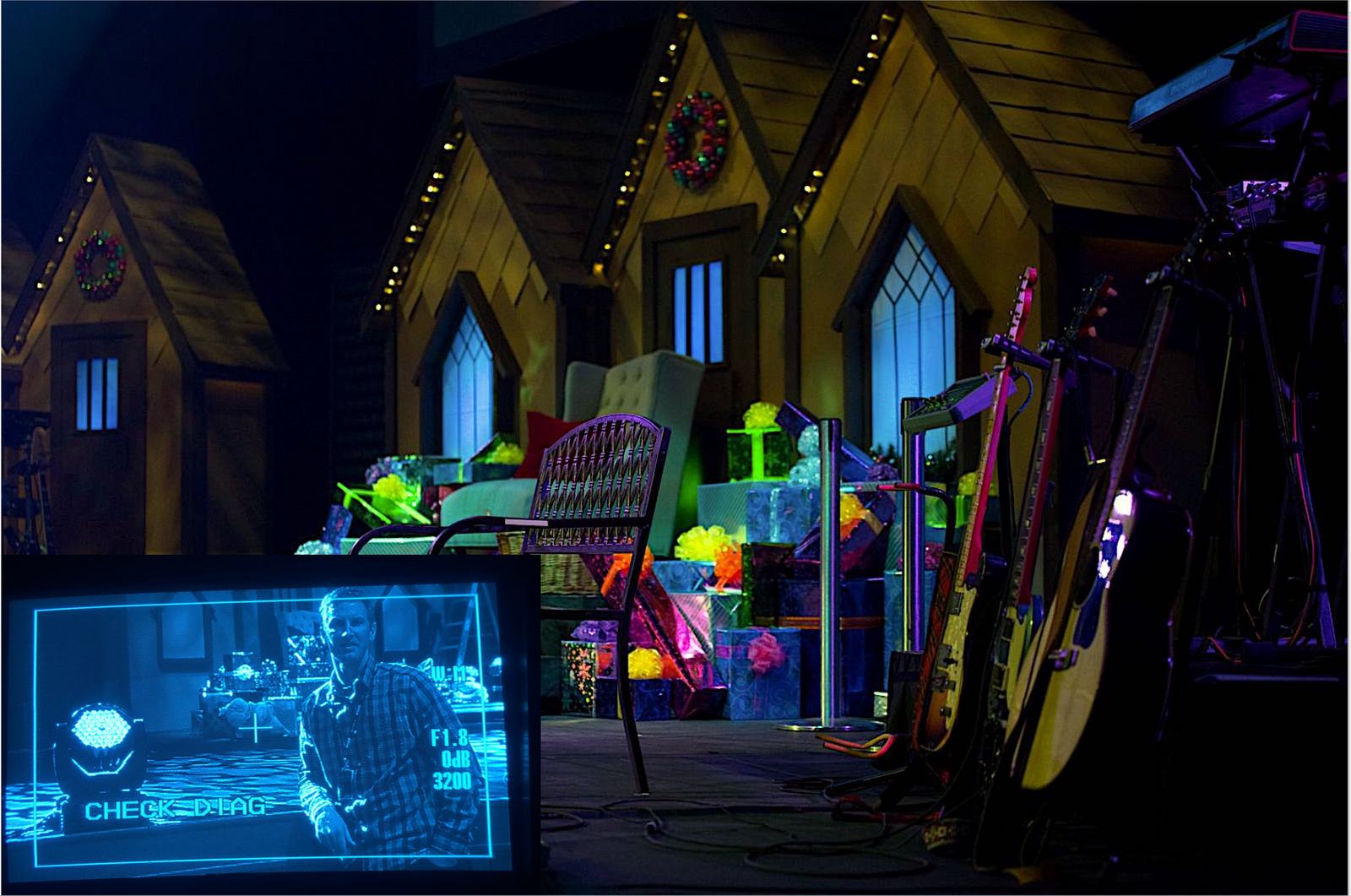 Fun too, to coach blocking for a the broadcast into during the countdown. My friend snapped this photo of yours truly that he used to coach the crew in duplicating the shot composition.

Thoughts to Remember When Creating a Space for Worship

I rattled off a stream of thought in response to my friend asking me what things I think about when designing. He took that email and compiled it into this list; which his organization now uses this as part of their planing meetings. Perhaps it is a helpful guide for you to consider as well...
Thoughts to Remember When Creating a Space for Worship

On my way home from our Production Core retreat, our conversation turned to the topic of how we shoot for broadcast and IMAG. We were referencing a video link we saw on Twitter that a TD from another church had posted. They took a shot of the audience that struck us as odd. A perfect example of a distraction that pulls us out of a moment. It lead to us talking about how we shot our Christmas service; particularly our candle-lighting moment…
I said something at some point that struck a coworker in such a way as he finally caught a glimpse of what I mean when I say, "use production to help tell the story."
The short version of the conversation is, I think there can be a legitimate place for taking shots of the audience - at least for broadcast. If the audience is on the side screens, it can take them out of the moment (similar to the Heisenberg effect) - Anyway, I was saying how it would be better to live on (spend longer time with the same shot of) a well composed shot of the lead singer (or the guitar player if he's playing a lead line that is carrying the moment) then to show a shot of the audience or background vocal if they are not engaged in the music and having unexpressive smile to go along with their singing. If a backing musician or section of the crowd is visibly engaged in the moment, then take the shot; if not, then definitely don't.
Furthermore, I'd encourage our Producer and leadership to step in to the leadership moment with any person on stage who isn't practicing the discipline of being visibly engaged in the moment.

So I wanted to share a blog about our new design. I was alone in the auditorium, and on a whim I decided to point my phone at myself and take you on a video tour of this weekend's design.
Please excuse my stutter and the not-broadcast-legal colors. Hopefully my off-the-cuff content makes sense and the camera shots are somewhat helpful. Ask me questions about anything I wasn't clear on.
Please also give me feedback: 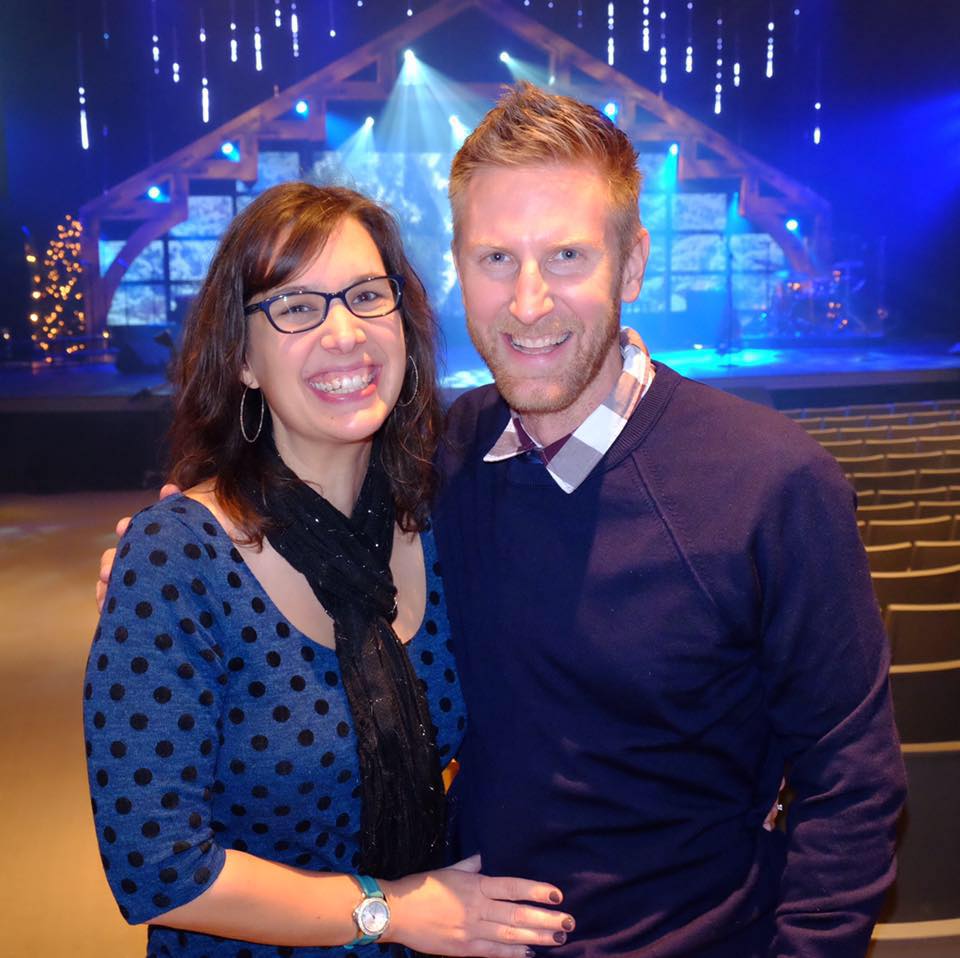